What Is Seat Belt Pretensioner? 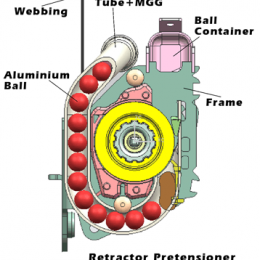 A seat belt pretensioner is a device that is used to hold a passenger firmly in their seat just before and at the start of a collision (especially in a front or head-on collision). The seat belt pretensioner allows that passenger to come into contact with the inflated airbag in a controlled way. With a seat belt, there is still a small space between it and the passenger. If a frontal collision occurs, the passenger’s body moves forward quickly but the seat belt stiffens up to restrain the passenger from any further forward movement. The passenger’s body can also compress against the seat belt in the slight forward movement. Pretensioners tightens and reduces slack in seat belts to protect occupants from rapidly moving forward in the event of a crash.

Like a valiant but tragic hero, the seatbelt pretensioner sacrifices its life in an accident, in order to save yours. While few of us will ever have to bail out of a stricken fighter jet mid-flight, it should be somewhat re-assuring to know that similar, seatbelt pretensioner technology will help keep us anchored if we ever get into a head-on car collision.

If you could not find the right pretensioner model , please send inquiry now or download catalogue for more details.